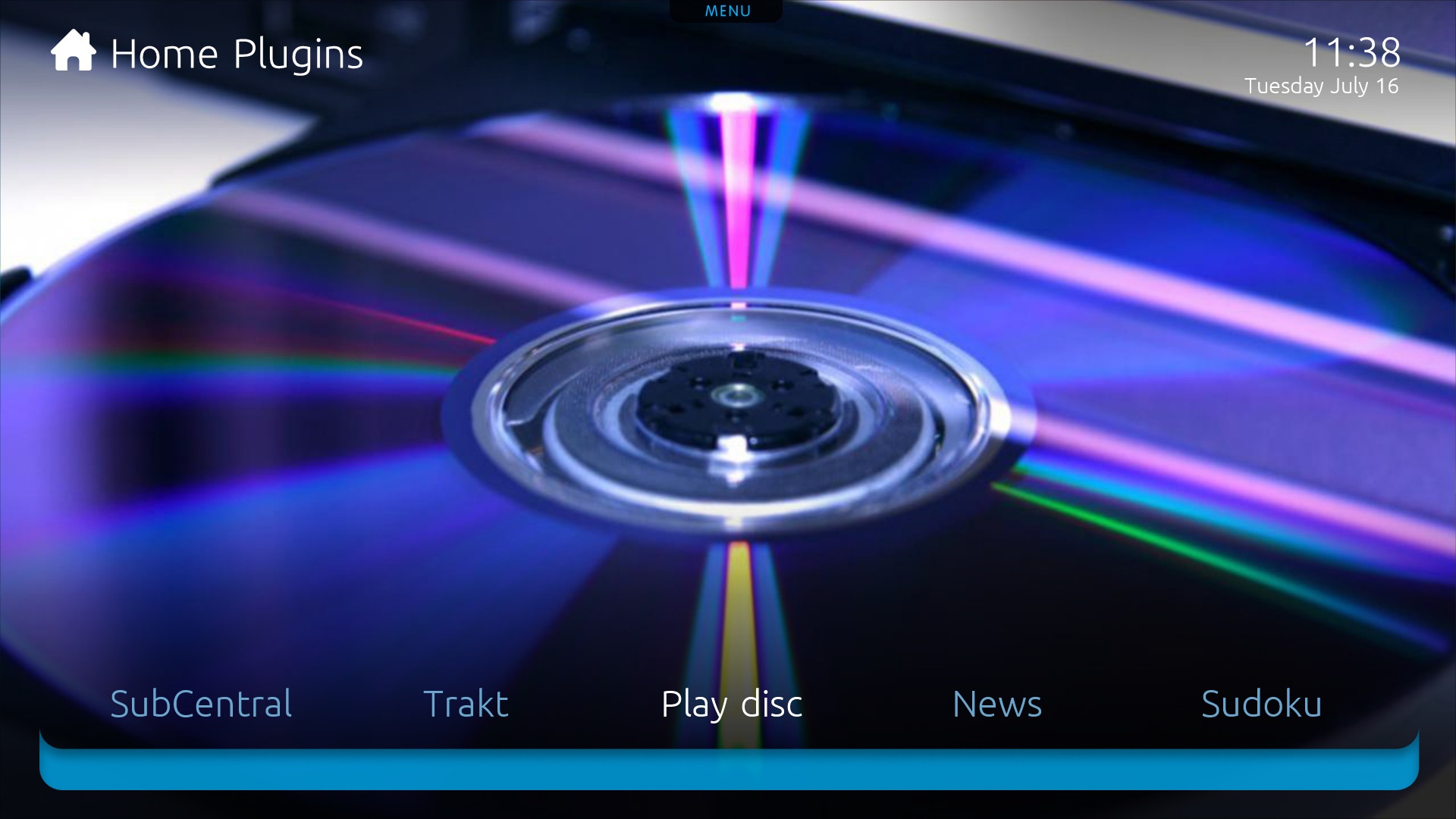 You may select or change autoplay options, codecs, language, subtitle aspect ratios and many more settings for Blu-ray Playback, see:

Of course, you You may never need to select use the Play Disc since the settings you select in menu option if you enable autoplay (Configuration > DVD Discs/Images > Autoplay will normally ). When autoplay is enabled and you insert a disc, MediaPortal will ask if you wish to play any the disc inserted. 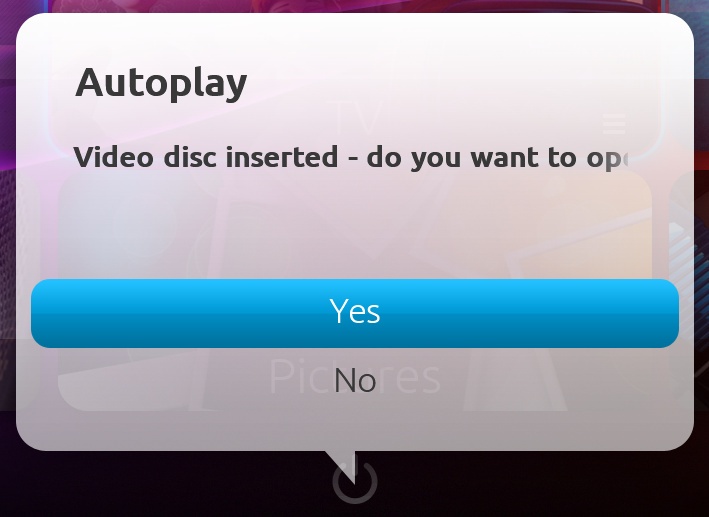 However, you may disable autoplay and use the Play

You can also Installing and configuring a compatible Virtual Drive enables you to easily play Blu-ray, DVD or CD image files if you have configured Virtual Drive to use Daemon Tools or Virtual CloneDrive. Then you play the files using the Videos feature of MediaPortal. 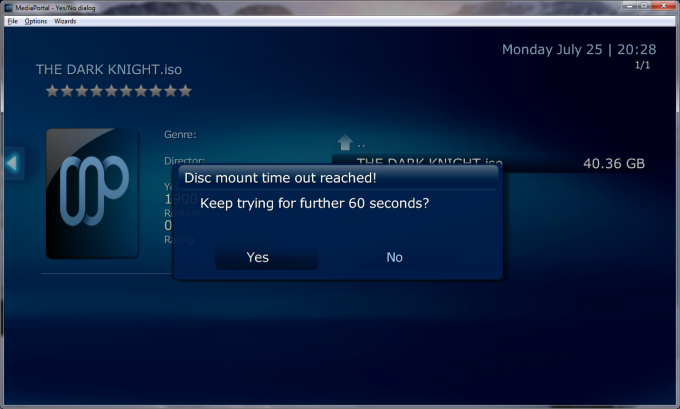 MediaPortal can play most of should be able to play almost all your Blu-ray discs , - including the menus , extras, etc!Development will still be ongoing because BD-J (Blu-ray Java discs) aren't supported (yet... under 1.16 Final version) but for now and extras - like any other Blu-ray player. This means you can enjoy the best Blu-ray video and audio quality right within MediaPortal, without the need of an external video player (like PowerDVD or TotalMedia Theatre) or a separate Blu-ray player.

Only a few caveats and limitations apply:

So what does this feature actually do? Well, it replaces your stand-alone Blu-ray player, since (if your Blu-ray disc is supported) you can simply play it from inside MediaPortal (using a Blu-ray drive connected to your computer). When you play the disc, you'll see the same menu as if you were playing the disc with a separate Blu-ray player. It will show you the Root Menu on start-up, you can select a chapter to watch, you can set your preferred Audio and Subtitle language and it even supports the Popup Menu! 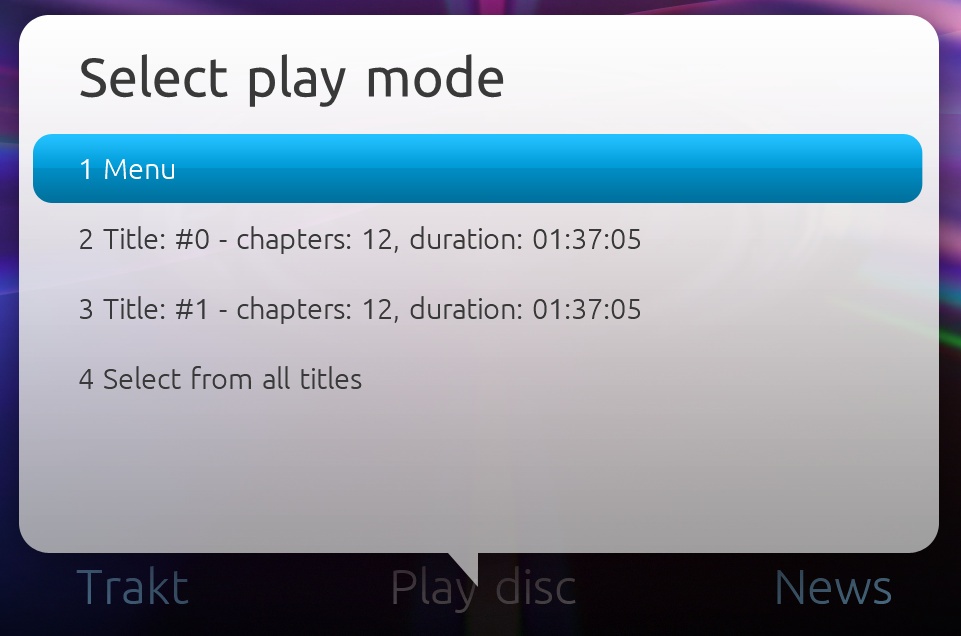 The Select play mode dialog will be displayed when you choose to play a Blu-ray:

This dialog enables you to choose if you want to view the Menu(option 1) , or directly play the Title (option 2, which is the Main Movie on the disc). Additionally you can choose Select from all titles to select a specific Title/Chapter from the Main Movie on the disc. Normally you start the disc with option 1, but if your Blu-ray has a Java Menu (BD-J disc) then this won't work (as stated in the limitations above). BD-J discs can still play the movie (by selecting option 2 or 3) but you won't have Menus.

So let's continue and select option 1 here, because we want to see the Menu: 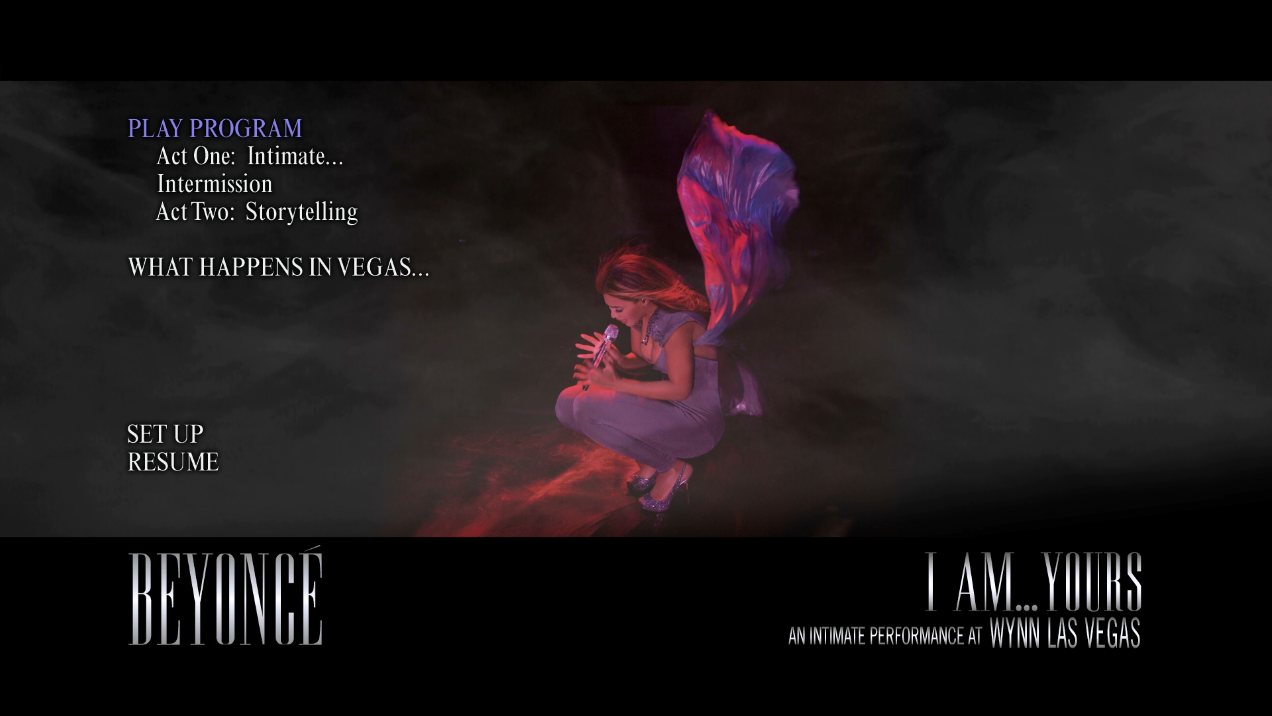 And there it is! Just as on a normal Blu-ray player, you can select any option here. In case of this Blu-ray disc (Music Concert), you can play the entire concert (Play Program), play a specific part from the concert (Act One or Two), check the extras (What Happens in Vegas...) or select SetUp, which lets you select the audio and subtitle language to useone of the titles.

Normally it's easiest to use menu mode. However, some Blu-rays don't have menus. Titles mode can also be used if MediaPortal fails to load/display the menu properly (please report such problems!).

The titles with the longest duration - which are likely to be the main movie titles on a movie Blu-ray - are listed first for your convenience. Additionally you can choose Select from all titles to select and view any title on the disc.

While playing the a disc , you can bring up the Context Menu by pressing

. Here you can change the usual settings.A variety of options are available:

Select option 5 to go to the Root Menu of the disc.

Some Blu-ray discs have a Popup Menu from where you can access most options of the Root Menu while still playing the movie in the background. Select option 6 from the Context Menu to access the Popup Menu. 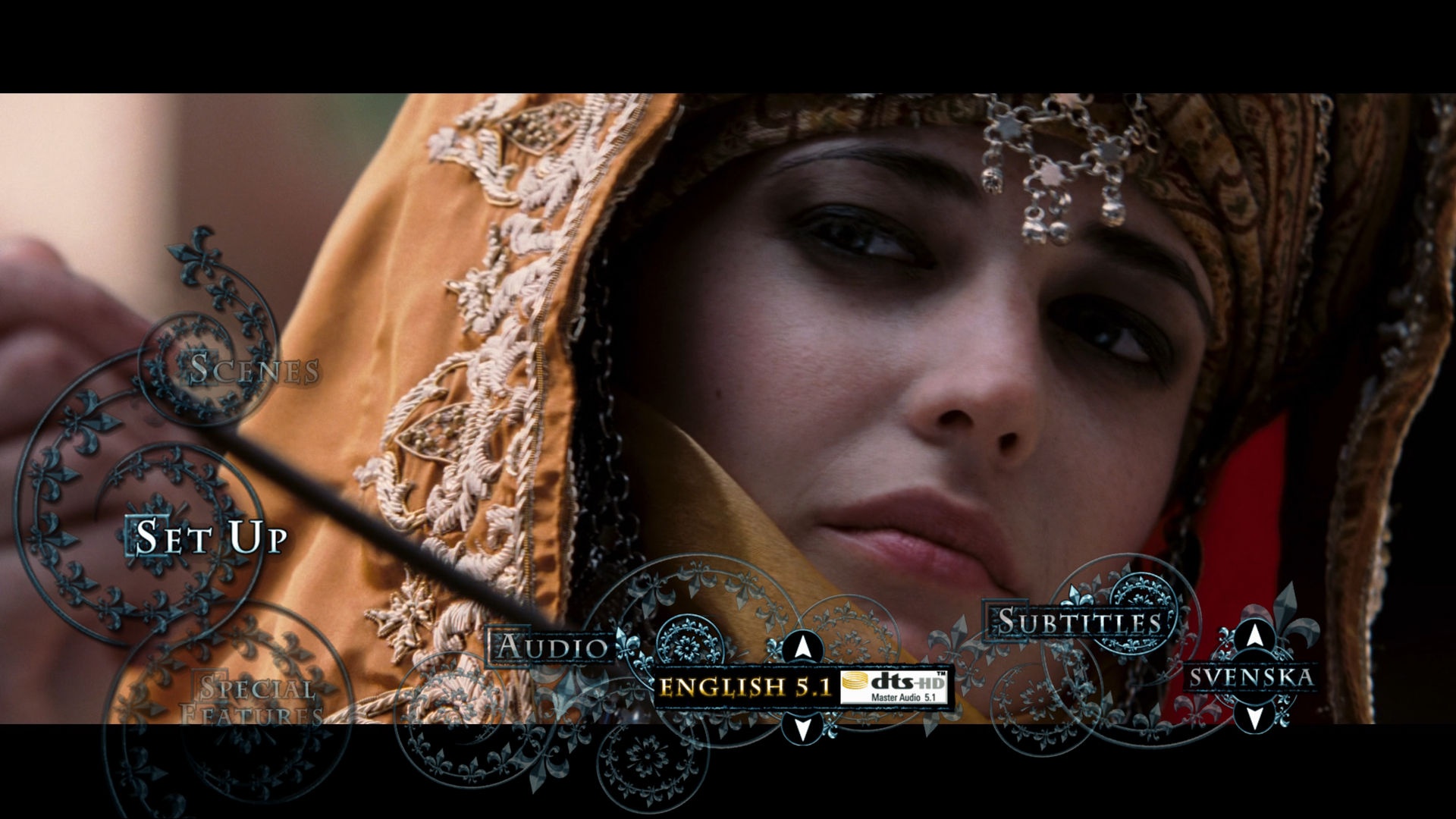 You can also select a chapter (option 7 from the Context Menu). 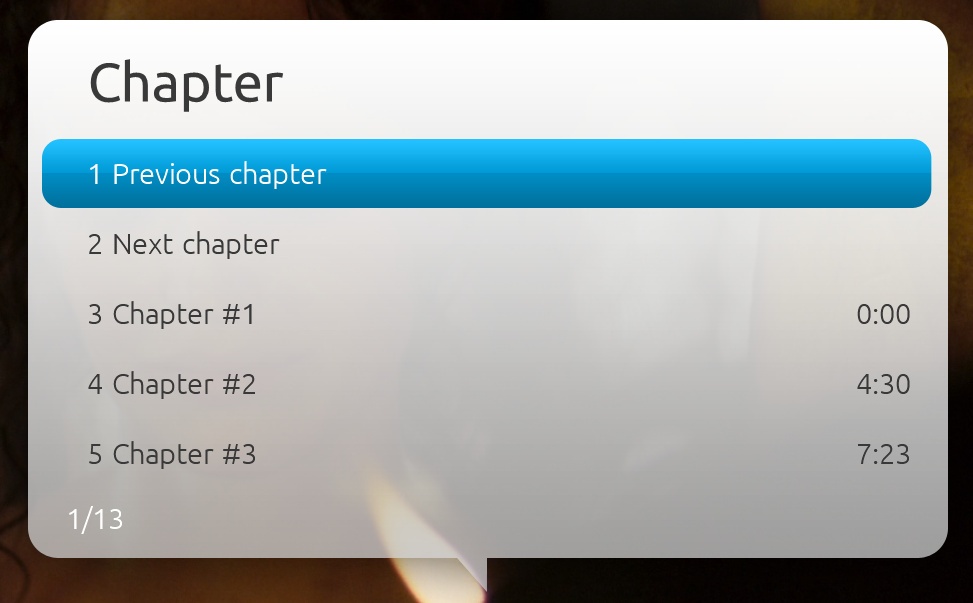 So, to sum it all up: Just start playback, select Menu (unless you have a BD-J disc, then you select the Title) and enjoy the highest quality of video and audio on your MediaPortal system!

When you resume playback of a Blu-ray Disc in Videos, you'll be presented with a popup: 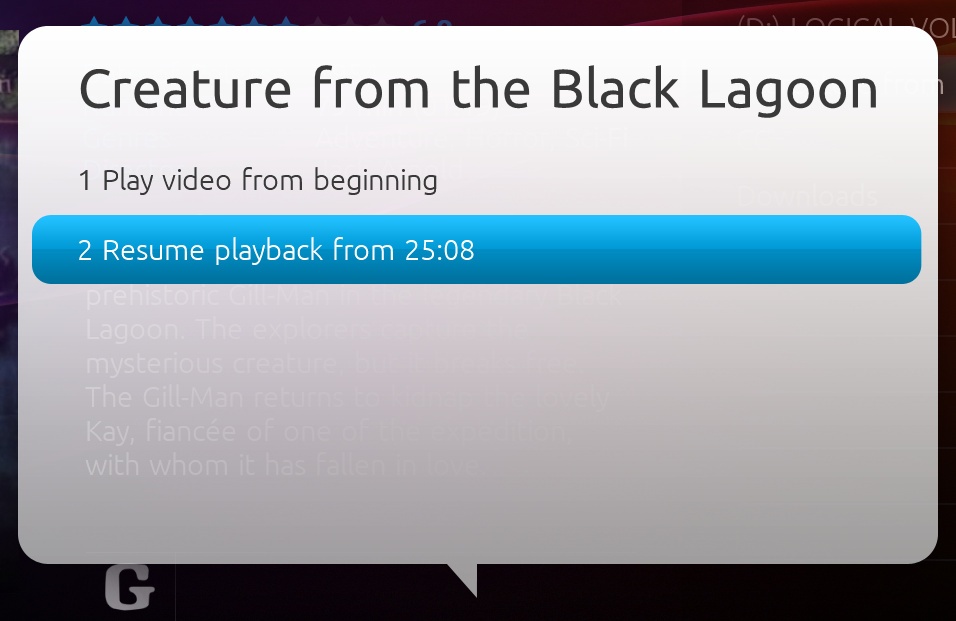 Select Play video from beginning to start playback from the beginning in Title Mode (skipping the Blu-ray Root Menu).

Close the Popup by pressing

Image Removed or Back on your remote, to be presented with the Menu/Title selection popup.

During testing of this new Feature, the Blu-ray Compatibility List was populated. This list (if your disc is on it) should tell you if the Menu will work or not. If you have a problem with a disc, and it's not on the Blu-ray Compatibility List, then you can report it to the team in the MediaPortal 1 Forums. To investigate the problem, the team might need you to provide a sample of your disc.

If you get the error message Unable to play index.bdmv when playing a Blu-ray disc it is most likely an encrypted disc. See Limitations.

Many of the options are common to regular Video Playback; others are specific to the type of disc you're playing.

The root menu (option 5) is the menu that's displayed when you start playing a DVD or select menu in the Blu-ray play mode dialog:

You can navigate this menu just as you would with a commercial Blu-ray or DVD player.

Some Blu-ray discs have a popup menu (option 6). Popup menus typically enable access to most of the settings available in the root menu without stopping the disc.

You can select a chapter (option 7) to view: