What does this plugin do?

EventGhost's main functions is all about events and macros.

There's dozens of EventGhost plugins that can trigger an event with the use of peripherals, such as keyboards, IR and RF receivers, joysticks and gamepads, Android devices, network communication, web server, on screen menu, timer, voice control, sunset/sunrise and much more.

There's just as many EventGhost plugins that can be used in macros to execute commands, for example send commands to dozens of preconfigured media software, receivers, TV:s and projectors, lights, ceiling fans, start and stop other software, move the mouse cursor and much more.

It's very simple to combine events and macros in EventGhost. For example create a macro that starts MediaPortal and drag + drop an event from your IR remote's Media button to the macro. The next time you press the Media button on your remote, MediaPortal will start.

What can I do with this plugin?

EventGhostPlus will trigger events in EventGhost when you start, pause or stop a video or play music. The events can be used to trigger any macro such as turn off the lights in the room when playing a video. Turn them on again when stopping or pausing. Automatically set the lights to 80% when watching TV and 40% when playing music. Change your display to 3D mode when playing a Side-by-Side 3D video. Turn on your ceiling fan when watching a movie of the genre Romance. Anything is possible.

You can configure EventGhostPlus from MediaPortal Configuration / Plugins. 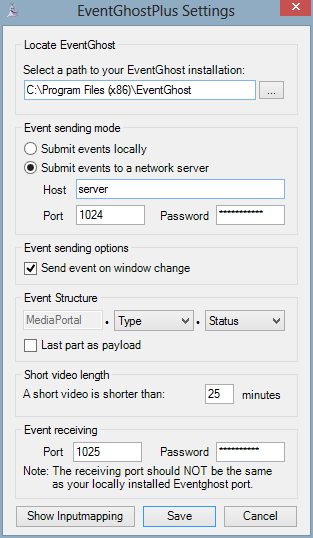 Enter the path to your EventGhost installation. You only have to use this box if Event sending mode is set to Submit events locally.

Sends events directly to EventGhost installed on the local computer. Events will be triggered by executing the EventGhost.exe -e file.

Submit events to a network server

Events will be sent to an EventGhost installation on the IP address or host name entered into the Host field. You need to add the Network Event Receiver plugin in the remote EventGhost configuration for it to be able to receive the trigger sent from EventGhostPlus. EventGhost do not have to be installed on the MediaPortal and EventGhostPlus computer in this case.

use and IP adress for the network server host instead of hostname.

When this option is checked, EventGhostPlus will send triggers to EventGhost when navigating around different MediaPortal windows, such as Plugins, TV and Videos.

An example of events received by EventGhost and triggered by EventGhostPlus when opening MP TV-Series plugin, the plugins window, Home and more in MediaPortal.

Defines the structure of the event that is triggered in EventGhost. Below is an example of the structure MediaPortal.Type.Status.

The last part (Status or Type) will be sent as a payload to EventGhost. This can be useful if you wish all events of a certain type (for example Recordings: Play, Pause, Resume, Stop and End) to trigger a macro without having to add them all or if you use a Python script that processes the event.

You can decide how long a short video is by entering a maximum video length in the Short video length field. This can be used to trigger different macros in EventGhost depending on the length of the video. For example you might want to turn of the lights in the room when playing a long video but not every time you watch a trailer.

In the Plugin Configuration you set a port and a password for receiving events. It's very important that this port is different from what you configured in your local EventGhost Network Message Receiver plugin. When you have set this up extract the

Now when you add a plugin in EventGhost you'll see MediaPortal Message Sender there to select. The configuration will popup and you have to enter the name or IP-address of the HTPC, the password and port you entered in the EventGhostPlus configuration at the Event receiving section. Now create an action or macro and select the MediaPortal Message Sender > SendMessage action.

You can customize the message and the timeout period in the SendMessage configuration window: 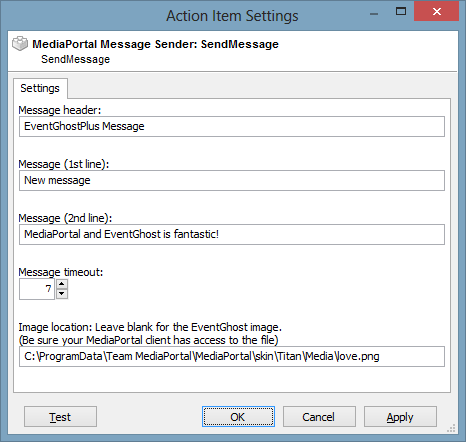 When this action is triggered, it will send the message to the EventGhostPlus plugin which will show it as a dialog in MediaPortal (if it is running): 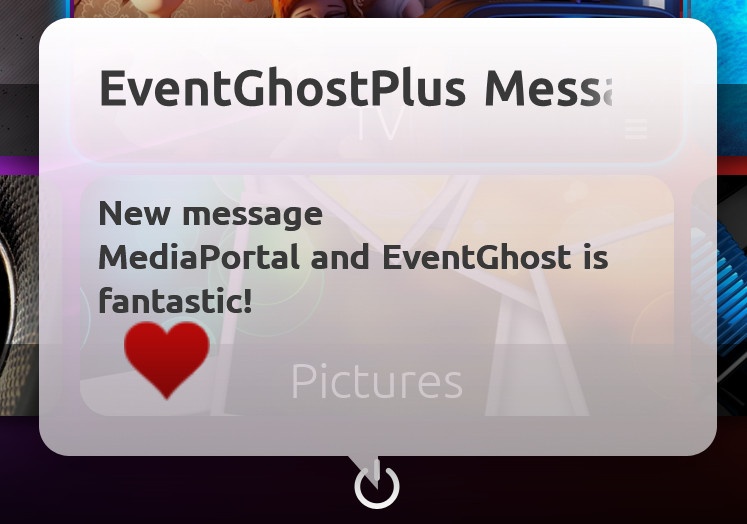 If MediaPortal is not running or the message could not be sent to the EventGhostPlus plugin, you will see an error message in the EventGhost log pane:

If you trigger events with a payload you can also use

you need to enter the number of the payload you want to send to MediaPortal. Event payloads start with

. Be careful though, EventGhost will generate errors when you use payload with an event without a payload. For testing you should always enter something by hand. And if all is successful you'll see the message in Mediaportal.

Open EventGhost and add the MediaPortal plugin to the AutoStart folder in your local EventGhost installation on the HTPC (if you wish to control MediaPortal from EventGhost).

A range of macros will be created, you can add events to them to control MediaPortal.

If you plan on only using a few buttons you can also use the SendRemoteButton action in the MediaPortal Message Sender plugin.

Follow the same installation procedure as described in the "Messages" section above.

You can create an action or macro and select the MediaPortalMessageSender -> SendRemoteButton, select the button you want to be sent, and press OK.

Every time this macro is triggered MediaPortal will be controlled with that button as if you pressed the button on your remote.

These buttons can also be customized as described below in "Show Inputmapping".

Inputmapping can be used to configure the input triggers coming from EventGhost (usually remote buttons).

See example below which configures the *-button to switch audio streams in the currently playing video file: 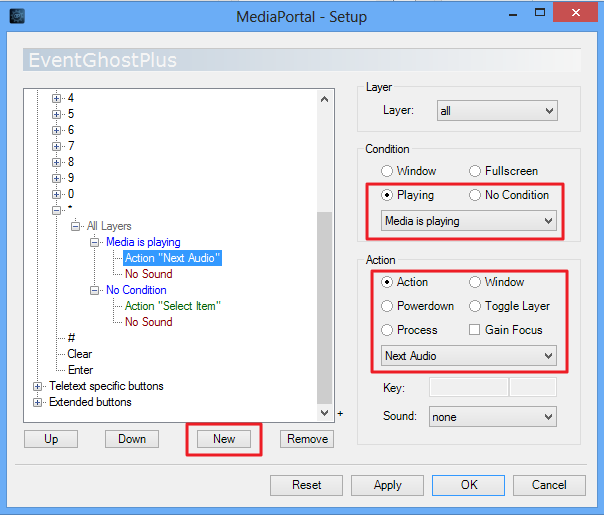 Events sent by EventGhostPlus (everything in between brackets [] is sent as payload):