On 8 Apr 2012, rsbrux  suggested that the content pertaining to channel groups be split into a sub page (like Mapping sub page), and include info about 'reserved' character strings (e.g. in MP 1.2.x it seems impossible to create a channel group named "CH".)

In this section you can manage your TV channels that you got by either adding them manually or (much more likely) by doing a channel scan on your tv card as described in TV Servers.

The TV Groups section in TV Channels configuration allows you to create groups of channels. The advantage is that rather than looking through a long list (with DVB-S this may be hundreds of channels) you can filter it down to the ones you want. You may create as many Channel Groups as you wish, for example to group channels by genre such as "Entertainment", "News", "Kids", "Music", "Films" or to give each user his personalized favorites list.

The order of the groups can simply be changed by dragging the tab of the group with pressed left mouse key.

The active group displayed in MediaPortal can be switched in the following ways :

The group order here is reflected 1:1 in MediaPortal when watching TV (Mini-Guide) or in the EPG-Guide.

You have at least 2 groups present after a successful scan:

These two fixed groups can be neither deleted nor renamed!

Important note: When you have more than one card of  tuner-type (e.g. a twin DVB-S card or two separate DVB-S cards) duplicate channels with identical tuning details found on both cards are only displayed once in the channel list. They are for all practical purposes treated as one virtually combined channel. (See also:Mini GuideTV Guide Channel Combinations)

There can be additional, automatically created groups after scanning if you have checked the corresponding options

These groups can be deleted by right-clicking on their tab.
Nevertheless they cannot be renamed!

All other manually created groups can be renamed and deleted at will by right-clicking on their tab.

You can order the channels inside a group list simply by either dragging and dropping a single or a whole bunch of marked channels or alternatively with the up and down-arrows below the channel group lists.

This group has in contrast to all other groups special controls which are explained further down. 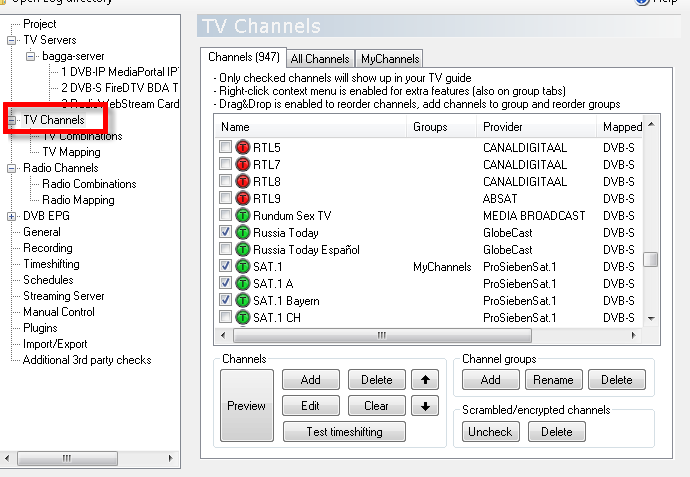 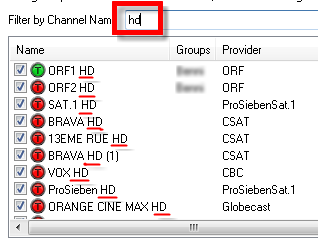 You can also sort alphabetically, by group name or by provider name by clicking on the respective column head.

Right-click on one or more marked channels

This opens a sub-menu:

SID is the Service ID of a channel in DVB.
The last three options usually only make sense if the channel names are inconclusive or non-existing.

Editing channels is further explained in the Add or Edit a Channel section.

Two slow clicks on a channel-name

Makes the name of the channel editable

Opens a separate window to actually preview the selected channel which is useful for a lot of purposes.

Sometimes you get an inconclusive or crippled channel-name (or none at all often in analog tuning) and hereby can check what the channel really is.

Furthermore a lot of scrambled or encrypted channels as well as pure data-channels aren't flagged or recognized as such and must be manually checked.

When clicking this option a small window "Testing all checked tv channels" pops up and displays the currently tested channel.

When tuning/timeshifting doesn't succeed  the channel will be unchecked in the channel list.

Remember: the channel doesn't get deleted, but only unchecked and thus doesn't appear in the channel list anymore when actually watching TV.

Though this takes some time for all channels to finish, it saves much more time compared to finding out by hand all channels that can't be displayed (e.g. too weak signal, scrambled/encrypted, channel doesn't broadcast anymore)

You can interrupt the testing at any time by clicking the "Test" button again (which during testing is renamed "Stop").

Deletes one or more marked channels from the channel list after a confirmation question ("Do you really want to...").

Deletes all channels from the channel list after a confirmation question ("Do you really want to...").

Allows you to add, rename or delete a channel group from the Channels (nnn) group.

You can also rename or delete a group by right-clicking on the respective group-tab.

Creating a new group is also possible by right-clicking a selected channel, then expand Add to group and selecting the down-most entry (New...)

The first option only unchecks scrambled/encrypted channels so that you keep them in the scanned channel list but they aren't visible in the TV-guide/EPG.

If you don't have a CAM/CI to descramble/decrypt these channels its best to delete them to get a cleaner channel list.

This allows you to combine the same channel found on 2 or more different cards. For example, you may have the same channel broadcast on analogue, DVB-T and DVB-S. If the channel is selected or used for recording, MediaPortal will use the highest priority TV card that is free that has that channel present.

Mappings determine which cards can be used for which channels. If a channel is mapped to a card it means that card can be used to view/record the channel. Mappings are automatically created when you scan for channels but it can be useful at times to do manual mappings.

When going to one of the other groups you have the following options to work with the channels: 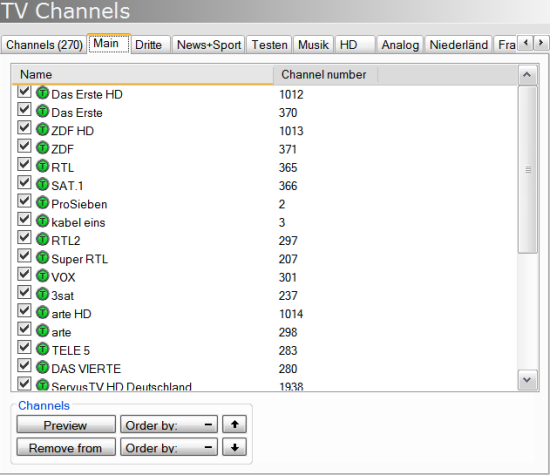 Right-clicking on a channel gives you the choice of