In this section you can configure various settings related to the recording of TV and Radio content in MediaPortal. The section is divided into several tabs which are described below.

Recording settings apply to both TV and radio recordings. For information on accessing your recordings in MediaPortal, see: 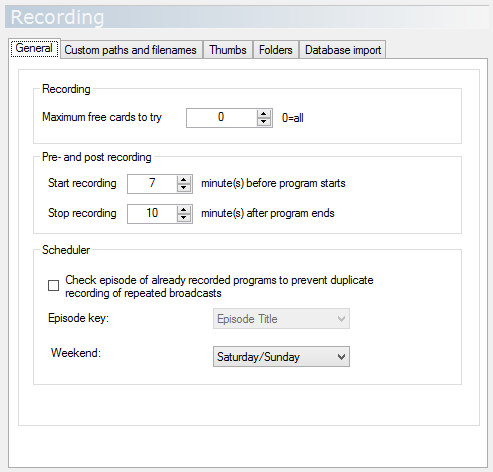 Defines the maximum numbers of tv cards to use for recordings. For example if you have 4 tv cards and set this value to 3 you can be sure to always have at least 1 tv card free for live TV.

Allows you to set the time you want the TV Engine to start recording the channel before the time of the scheduled recording. If you are using PowerScheduler or similar the PC will wake up at this time if it is in standby or hibernate to start the recording.

Does as it says. It is usually a good idea to leave some leeway after a programme is scheduled to finish as broadcasters do not always stick to the exact times advertised.

When multiple episodes of a recurring program are broadcast and this setting is active, the scheduler will try to check if the same episode has already been recorded before starting the new recording. The dropdown list next to Episode key allows you to define how the scheduler checks if two episodes are the same, either by Episode Title or by Episode Number.

When creating an advanced recording in MediaPortal you can select to only record shows on weekdays or weekend. This setting defines which weekdays are considered weekend. Default: Saturday/Sunday 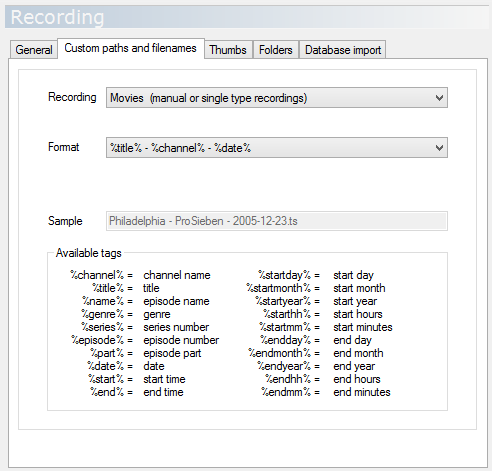 Use this tab to set the file and folder name format the TV-Server should use for recordings. There are two types of recordings (single and schedule) and they can have different file name formatting.

Select the recording type to configure:

Select one of the pre-defined file name formats or choose [User custom value] to create one of your own. You can use tags to replace part of the file name with information about the recording. Check the Sample textbox to see the result of your custom format for a fictional recording. 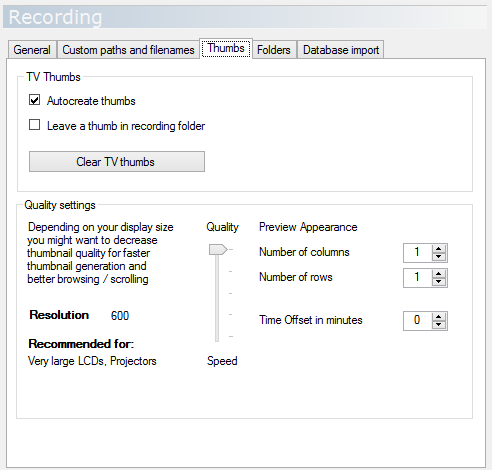 Leave a thumb in recording folder

) and has a fixed size independent of the quality settings.
Note: Preview images in the recording folders will not be deleted when you Clear TV thumbs. You must remove the existing ones manually - only then new thumbs will be regenerated.

You can delete all the recorded TV thumbs by clicking the clear TV thumbs button - required if you change the Preview Appearance.

Tip Many Skins now  use larger images, and HD resolutions. You may wish to increase your thumbs resolution to the highest quality to get best results with these skins.

Default: 5 (Resolution 600)
Select the quality of the TV thumbs that are generated. The recommendation to the left gives a general idea what the setting can be used for: LCD televisions ("flat screens") generally need higher quality thumbnails than CRT (classic) televisions because they generally produce a sharper image.

The preview image (thumb) may consist of multiple subsequent screenshots taken from the video. These are then arranged in tiles with the given number of rows and columns. The time between the thumbs will be calculated automatically from the video duration.

1 column and 1 row will create a single thumbnail: 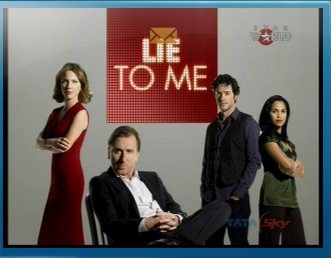 2 columns and 2 rows will create a grid of four thumbnails: 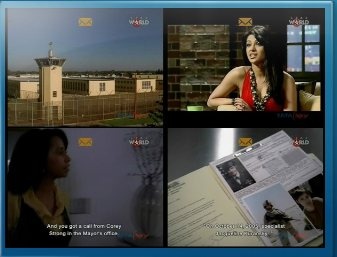 Use this option to change the time offset in minutes. If you set it to 2 minutes for example, the first thumb will be generated after two minutes into the recording. Should the video duration be less than the time offset, the time offset is automatically shorter. 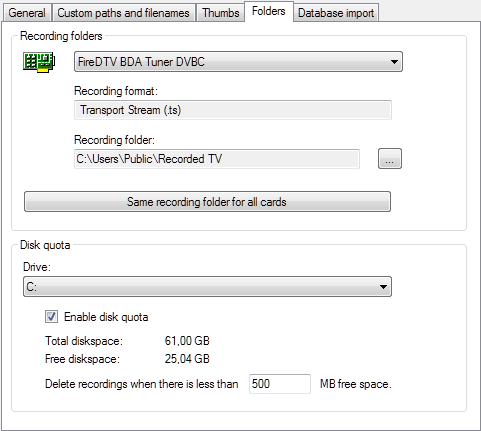 This tab allows you to specify the folders where programmes will be recorded to for each TV card. This needs to be done for each individual TV card using the drop down menu. If you want one folder for all TV cards you can select the folder you'd like and press Same recording folder for all cards. Note that the Recording Format is alway Transport Stream (

In earlier versions of MediaPortal it was also possible to save to mpeg files, but this feature has been removed due to a windows bug with the playback of mpeg files (See this blog post -> 6. Why does MP use the ts format and not just mpg?).

Tip The quota management runs every 15 minutes and will remove recordings if free disk space is less than the configured quota.

The smallest quota allowed is 500 MB. MediaPortal will use 500 MB as quota even if you enter a lower value. If this option is disabled, recordings will not be automatically deleted.

Enables automatic disk quota for drives used in the recording paths. You can only choose a drive that is configured in the Recording Folder above.

Note: The Win32_LogicalDisk WMI class (which is used to calculate disk space) represents a data source that resolves to a local storage device on a computer system running Windows.

As of v1.6.0, you can enable disk quota for network mapped drives and external drives if you have set a recording folder on such drives. 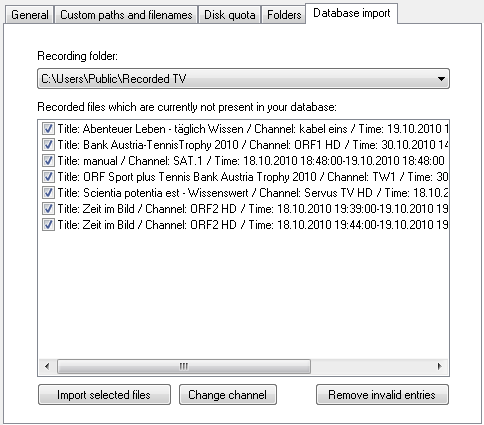 If you try to import a recording from a channel that is no-longer in your channel list, the recording will be greyed-out and will not import. If this happens, click on the 'Change channel' button and you can select a new channel to assign the recording to and this will import it.