You should see one or more tuners listed as type Atsc.
Tip If you don't see any tuners listed this indicates TV Server has not yet successfully detected your tuners. Close TV Server configuration, wait 30 seconds, then reopen. 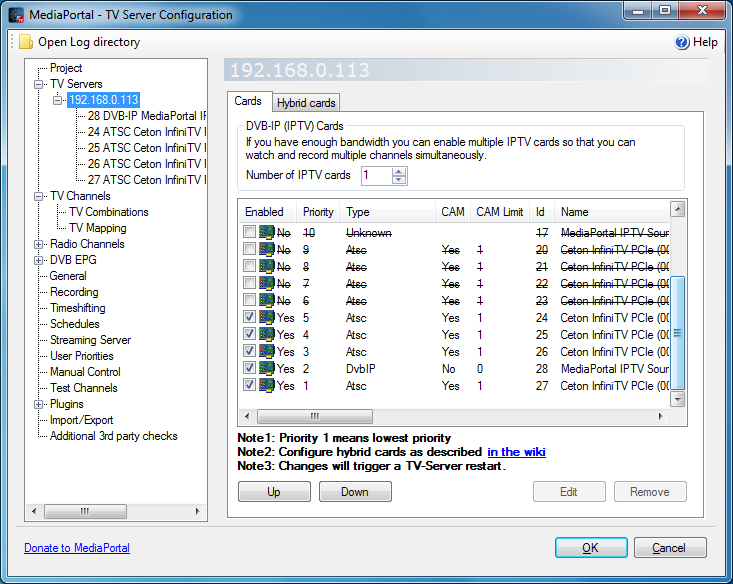 Note that you may see more tuners than you expect for three reasons: 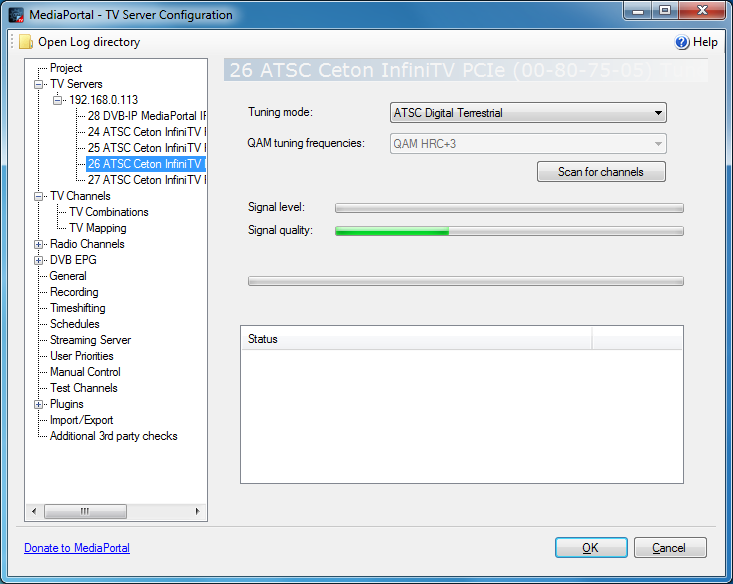 Modern ATSC tuners often support receiving TV and radio signals from a variety of sources. This section of TV Server is used to scan digital sources; use the Scan Analog section for analog sources. Note most over-the-air analog TV (NTSC) broadcasts in the United States of America and Canada were turned off in 2009 and 2011 respectively. Low power transmitters/repeaters remain in more rural areas. Some cable providers also continue to broadcast analog channels.

To scan for digital channels broadcast over the air using a tuner connected to an aerial, select "ATSC Digital Terrestrial".

To scan for digital channels broadcast on a cable system using a tuner connected to a cable feed, select "Clear QAM Cable".

To scan for digital channels broadcast on a cable system using a CableCARD tuner connected to a cable feed, select "Digital Cable".

When scanning with tuning mode Clear QAM Cable, you need to select the frequency plan used by your cable provider. If you're not sure what frequency plan your cable provider uses, we recommend you try QAM Standard first. If you find that channels are missing or have unexpectedly poor signal quality, try QAM HRC. QAM HRC + 3 and QAM IRC are only rarely used in practise so not recommended unless you are missing many channels. QAM Std Alternative_is almost identical to _QAM Standard; only use in extreme cases.

In both cases timing is dependent on your SDT/VCT timeout setting.

If scanning digital cable, you should expect to see a message "out-of-band service information" as soon as you start scanning. After that it may appear like nothing is happening for several minutes. This is absolutely normal. TV Server is gathering channel information from the CableCARD in the background, and just needs some time to pull it all in. Please be patient. Expect to wait up to 5 minutes.

Once the scan completes you should see a message telling you the number of new and updated channels that TV Server found.

If TV Server does not find any new or updated channels that means it is having problems getting information from the CableCARD. This is almost always due to firewall configuration. Ensure TV Server has full access to your network and rescan.

After the scan completes, check the TV Channels list. Some channels do not have names so will be named "Unknown...", however the vast majority (80%+) of your channels should have correct names and numbers. If this is not the case (ie. you have a lot of channels named "Unknown...") it might mean that the scan didn't have long enough to grab all the channel information from the CableCARD. Ensure you set the SDT/VCT timeout to at least 120 seconds as instructed above, and consider increasing the value (anything more than 300 seconds is excessive and will not help) and rescanning to get correct channel information. If you decide to rescan, make sure you delete all channels first because TV Server does not update channel names after the channels have been created.