homeTeam BlogBlog HistoryMediaPortal 2: What does it bring to the table?

MediaPortal 2 has progressed quite nicely, bringing exciting new features for every release! The rapid increase in features is a result of the clean code, structure and architecture that MediaPortal 2 is built upon.

The main goal of MediaPortal 2 is to provide the best mediacenter software available when it comes to usability, flexibility and extensibility.

While you're waiting for the highly anticipated Alpha 2 release of MediaPortal 2, here is a short summary of what MediaPortal 2 will bring to the table.

The installation process is quite straight forward, with only one setting to configure; whether you are installing as a client, a server - or both (we'll get back to that later). The entire process takes less than two minutes.

Then you're going to need to do some configuration, like the path to where your media is located, or Windows power saving settings. Everything is configured from inside the MediaPortal 2 GUI - no need to exit to launch a configuration utility any more!

When you first start MediaPortal 2, you'll first notice the rather simple splash screen without any information on what's going on in the background. The simple reason for this is that there really isn't any time to read anything before you enter MediaPortal 2 - about five seconds later!

Feel free to use task manager to monitor how much CPU and memory MediaPortal 2 uses and you'll find that it uses very little resources. This is of course good for both economy and the environment, but most of all it means the road to a near inaudible system is suddenly far less bumpy.

Oh, the skin engine! Where to start! As you might have read already, the skin engine is totally rewritten and in contrast to MediaPortal 1, the MediaPortal 2 user interface is mainly based on vector graphics and uses less images. The advantage of using vector definitions for graphical elements instead of pixel-graphics will make them scale to different resolutions without any loss of quality. Kinda cool when we're entering the 4K era, ey?

Another cool thing is how robust the skin engine is. If you're a long time MediaPortal 1 user, you might remember the days we searched the forum for zip's containing plugins and skin-files to match your preferred skin - just hoping that everything was the same version. MediaPortal 1 has come a long way since then (thank god!), many thanks to MPEI. Because the skins are constructed hierarchically in MediaPortal 2, there will never be an issue where a particular plugin won't work with a specific skin. Worst case scenario the template for the default skin will be used.

The MediaPortal 2 Server is responsible for the central management of all media. You can connect multiple clients to the server and across all those clients you get the same data. Besides the media files itself, this also includes the meta data like genre, summary, actors, as well as the play count, watched state and last time a media has been played. As a result the client is just that - a client to browse and play content from the server. You can just hook up a new computer with the MediaPortal 2 Client installed, connect to the server, and you are just about ready to go! Of course you can still use one computer for both client and server.

There is no graphical user interface (GUI) available when running the server only, but you can always monitor the status of the server from the system tray.

Another thing that separates MediaPortal 2 from every other media center is the modular design. In MediaPortal 2 everything is a plugin. Everything! Skins, media players - they are all "just a plug-in".

Due to the modular design, one plugin won't screw up another plugin and every plugin can thus easily be improved, added/removed or replaced.

Which brings us to the next thing...

Due to the modular design mentioned above, there is no longer "the" media player, as in all other media centers, but rather "a" media player. You can even call multiple players at the same time, which means you now can watch a muted channel while you listen to music (great for football/soccer half-time breaks!) or enjoy the benefits of having Picture-in-Picture (PiP)!

Oh, and have you heard about video background? Basically, it is a perfectly looped video used as skin background. You can see a video of it below, but believe me - it is even better than it looks when you get it on your big screen! Try the all new Titanium skin with this loop, and be amazed!

MediaPortal 2 uses the web-based localization platform Transifex. Translations are done by both team members and our excellent community. Even if MediaPortal 2 is only in Alpha-state, localization support is quite advanced already - currently 18 languages are more than 90 % complete!

Not only does MediaPortal 2  offer built-in meta data extractors for music/audio, but it even extracts meta data from videos and pictures. Got a lot of MKV or MP4 media files? You tag them - we read them!

Got a GPS within you digital camera, or tag your pics manually with the geo-location? Great! MediaPortal 2 reads it from the EXIF meta data and allows you to display and filter by the country/region/city where they have been taken.

As stated before, this is just a short summary of what MediaPortal 2 has to offer. Lots of minor - but still important stuff is already implemented, like proper 3rd party library usage, HTML build reports and excellent thumbnail handling - done with Windows API with fallback method.

If you want to follow what's going on regarding MediaPortal 2, then I recommend that you subscribe to this thread. If you really want to see how much MediaPortal 2 has progressed since the last release, have a look at the changelog.

GIVE IT A SPIN!

MediaPortal 2 (Alpha 2) is just around the corner.

Make sure to give it a try once it is released! 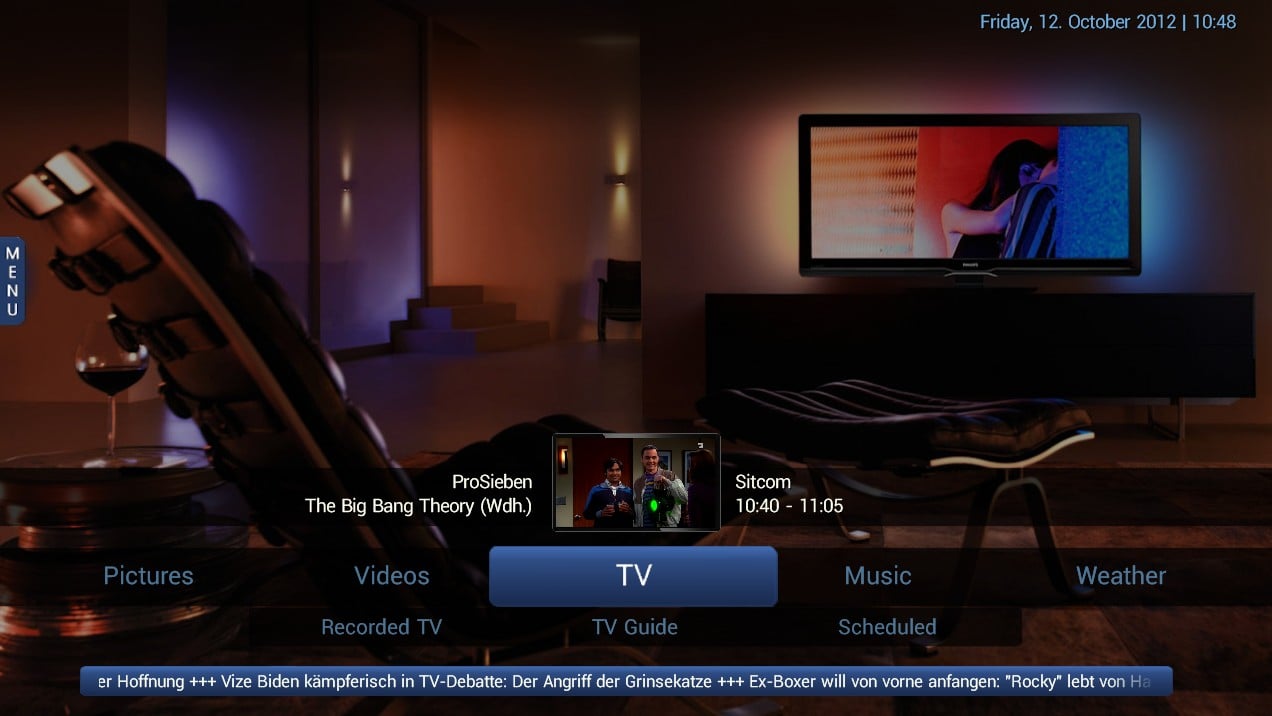 View Default Skin in our Gallery