First, thanks to all who proposed suggestions in the Comments thread and voted on the poll. Although the results speak for themselves, I thought it would be interesting to elaborate a bit on the top ten developments you selected for 2011.

What a great year for MediaPortal!  I hope I have not forgotten anyone or anything. There was so much development in so many areas in 2011, it is not easy to stay on top of it all! Read on to see what I mean. Development of MediaPortal shows no signs of slowing down for 2012. So fasten your seat belts and enjoy the ride!

The increased stability of MediaPortal in 2011, was the top development selected, by far. It reflects a huge effort by the whole community, including those who test alpha, beta and RC releases, submit bug reports, submit patches to fix issues or add new features,  and develop our top notch extensions. In 2011 we increased our number of testers and developers significantly. They donated many hours of their time to improve stability and ensure it was maintained with all the new features we added to MediaPortal 1.2.0. With the vast array of hardware and configurations, and the flexibility MediaPortal offers, this is no small achievement!  It is one many popular commercial applications would envy and I think the entire community should be incredibly proud of what we have accomplished.

2011 saw our Extension installer really take off!  Originally developed by Dukus and released in 2010, now over 110 extensions use MPEI and make installing, updating and uninstalling your extensions a breeze.  In 2011, arion_p developed a Version Compatibility system for MediaPortal which Migue then incorporated into MPEI, so you never need to worry about installing incompatible extensions again!  Thanks for making our lives so much easier!

We know there is still room for improvement, notably that extensions installed via other extensions are not recognized by MPEI, and we hope to see even more great developments of the user interface and integration with MP in 2012!

I have added the Extensions plugin here, since it depends on MPEI, even though it received enough votes for the top ten on its own.

The Extensions plugin is a companion to the Extensions Installer (MPEI) which allows you to perform most of the same functions within the MediaPortal GUI.  It was originally developed by Dukus, who added the Website view in 2011 so you can browse the Plugins and Skins Downloads Repository from within MediaPortal. Version compatibility was incorporated by Migue. Then lftearme used his magic touch to make many significant improvements and fixes to the graphic user interface (GUI), which improved performance, functionality and appearance.

As a result, many skins have now implemented a notification/update button when updates to your extensions are available. Some extensions have started to implement the features to allow you to change extension settings from within the Extensions plugin. Life with MediaPortal is just getting so much easier!

The following developments might have had a lot to do with your votes:

The integration in MediaPortal of the WebEPG plugin (to grab TV Guide data from local web providers) was also a huge hit!
We are still hoping to improve support for North American TV standards and TV Guide (EPG) data now that we have more North American developers and testers on-board!

I am going to use a bit of poetic license here to group Skins and Skin Enhancements together. There were many awesome new creative skins including HD versions, released in 2011.  Many of you mentioned, and voted for:

Plus many of you voted for the great developments in the long time favorite skin StreamedMP - by trevor and ltfearme.

These new skins and developments could not have taken place without the many new features and improvements added to our Skin Engine by ajp8164, Migue, SilentException, Marvman, jameson_uk, and others - such as the new coverflow layout, improved (and conditional) animations, improved scrolling, image masks, skinnable virtual keyboards and skin expressions developed by arion_p - to mention just a few of the more obvious ones.

Our new Wiki really matured in 2011, with much more detailed and expanded content, vastly improved documentation of development by the whole Team, and more extensions providing documentation in our Wiki.  Thanks to all who contributed, especially our developers (you know how much they love writing docs!) and our awesome new Docs guys: vuego, rogerleifert and wonkyd.

We have plans for even more great improvements in 2012 - such as a new way of documenting the changes to latest releases in the What's New section, so you can view a 'mini-guide' for alpha, beta and RC releases.  We also hope to improve our User Guides and make it much easier for everyone to contribute such guides and tutorials.

In 2011 DieBagger introduced a 'simple', yet elegant and powerful patch for MediaPortal to open plugins with a parameter. It allows you to select a menu option in Videos, Moving Pictures, or My Films etc. and find related trailers via the OnlineVideos plugin, subtitles via the SubCentral plugin, or related recommended movies via the Trakt plugin.  Or, you can find related artists/music videos between the Youtube.fm and mvCentral or Pandora plugins.

It also allows you to open plugins to a specific view/site/part of the plugin, such as open OnlineVideos to your favorite video web stream.  It makes the user interface in MediaPortal even more intuitive and offers almost infinite possibilities. In 2012, I am sure we will see our talented extension developers come up with even more creative ways to use this feature!

Moving Pictures (developed by fforde, armandp and ZealotSix) has long been a favorite, some would say even essential, extension for MediaPortal. While it was not clear exactly which new developments you were voting for, I suspect they related to the links to Trailers and Subtitles, the new ReScan now feature, ability to set the size of thumbnails, and the addition of follw.it support.

It's also likely that many of you were thinking of the IMDb+ scraper and plugin which was not added to the poll until later. Developed by RoChess, IMDb+ allows you to select scraper options, control titles and editions, ratings, and much more!

Although MPExtended is still in development, it managed to make it to the top ten anyway. That should give you a clue how significant it will be in 2012!

MPExtended is actually a group of multiple applications:

MPExtended is the successor of the separate projects TV4Home, GmaWebService and MPWebStream. Here's a chart, courtesy of Lyfesaver74, to show you how it integrates in MediaPortal.

Kudos to all the developers: Oxan, Mike Lowrey, DieBagger for making sure MediaPortal remains viable in the web and mobile dominated future!

aMPdroid, developed by DieBagger, is one of the programs using MPExtended. It allows MediaPortal users to remote control their HTPC, browse and stream their video or music collection and program their TV using Android powered devices such as HTC Desire HD, Nexus S, Galaxy SII,, etc. It almost made it to the top ten on its own, so I squeezed it in here! It certainly extends access to MediaPortal for those on the go!

As I mentioned above under MPEI, in 2011 arion_p developed a new version compatibility system to ensure plugins are compatible with your current installed version of MediaPortal.  In the past, changes to the MediaPortal code base could cause some plugins to break or misbehave. The result was often an unstable system. Plus there was no way to figure out which plugins were causing the issues other than trial and error.

While this development may not be as obvious as some others, that is only a sign of how well it was implemented!  I suspect it may be one of the reasons why stability is rated as the top development of 2011!

I think it is worth noting the improvements made to our installer in 2011, especially the ease of updating MediaPortal to new versions. I want to offer a special thanks to chemelli for all the work he put into it. I know many users have appreciated it in the News release threads and I apologize for not thinking to add it to the poll.

In addition, the great improvements Deda made to the Videos feature of MediaPortal, and jameson_uk and hwahrmann made to the Music feature almost made it to the top ten. If you read the forum threads you will see how much their work is appreciated by many users. As these developments are still in process, there will be a lot more coming in 2012, so watch out!

2011 also saw incredible development of MediaPortal plugins, several of which were suggested as top ten developments, for good reason:

Well the list goes on and on. With over 60 new extensions added to our Plugins and Skins Downloads Repository in 2011, and even more updated with major enhancements and new features, I would highly recommend you read Lyfesaver's Blogs - While You Were Sleeping: Plugins #1 and While You Were Sleeping: Plugins #2. Posted on Friday every four weeks, these Blogs are worthy of an honorable mention themselves! 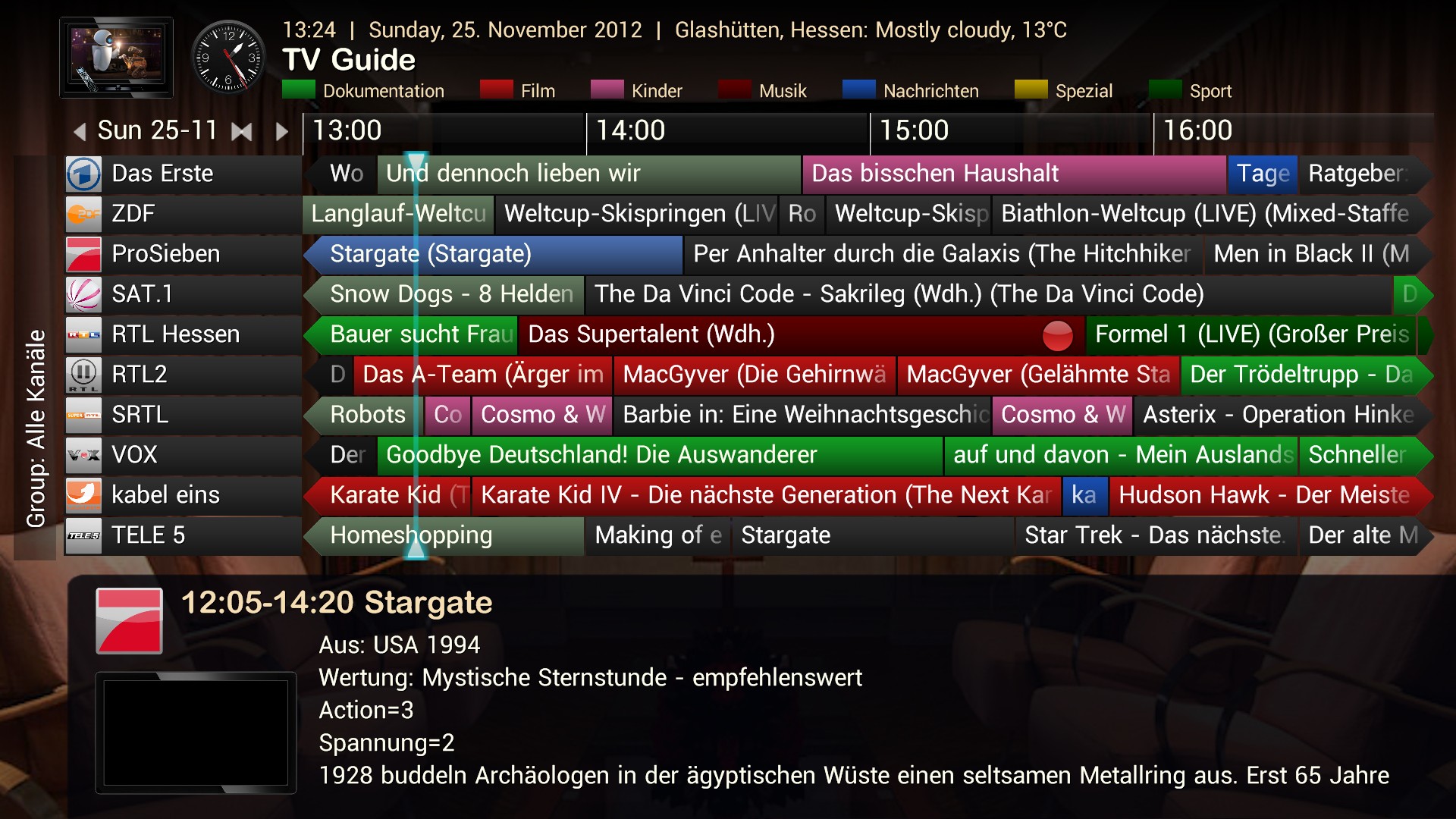